THE BASIC ASSUMPTIONS OF THE EXISTENTIAL VIEWS 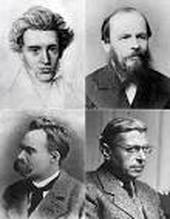 Existentialists
In seeking to define what is especially human and significant in human experience,
the existential theorists find three issues that are particularly important:
fear of dying, responsibility, and will.

THE FUNDAMENTAL ANXIETY: DEATH AND LIFE
Existential psychologists assert that the central human fear and the one
from which most psychopathology develops is the fear of dying. Anxiety
about death is most prominent in, and best recalled from childhood. Perhaps
because children are vulnerable, and because their worst imaginings
are barely informed by reality, their fears are stark, vivid, and memorable.
For them, the idea of death does not involve mere biological process. It is
terrifyingly full of awful meanings. Death means being forgotten, being left
out. Death means helplessness, aloneness, finiteness. In short, the idea of
death is so awful that children and adults nearly universally employ coping
strategies for dealing with it.
How does one deal with the fear of non-being? Broadly speaking, there are
two kinds of strategies: by coming to believe oneself special, and by fusion.
(Yalom, 1980).

Specialness
One way through which some people protect themselves from death fears is
by cultivating in themselves the notion that they are special. It is a peculiar
notion in that it holds that the laws of nature apply to all mortals except oneself.
The notion ofspecialness manifests itself in many ways. For example,
the terminally ill simply cannot believe that it is they who are dying. They
understand the laws of nature full and well, but they believe themselves
somehow to be exempt from them. Similarly, people who smoke heavily,
overeat, or fail to exercise sufficiently may also believe that somehow they
are exempt from nature's laws. The notion of specialness underlies many
valued character traits. Physical courage may result from the belief that one is inviolable.
So too may ambition and striving, and especially striving for power and control. But at the
extreme, the unconscious beliefin one's specialness may also lead to a spectrum
of behavior disorders. The workaholic who compulsively strives to
achieve success and power may also harbor the delusion that achieving that
one kind of specialness may confer the other, immortal kind. Narcissistic
people who devote enormous attention to themselves and are correspondingly
insensitive to the requirements of others may believe that only that
kind of self-nourishment will protect them from death and its associated
anxieties.

Fusion
Protection against the fear of death or nonbeing can also be achieved by
fusing with others. Fusion is an especially useful strategy for those whose
death fears take the form of loneliness. By attaching themselves to, and
making themselves indistinguishable from others, they hope that their lot is
cast with them. They believe that much as these others continue to live, so
will they. They also develop a fear of standing apart, as they believe that if
they do stand apart, they will no longer be protected from death.
The fear of standing apart has socially valuable features. Why else would
we marry and have children if not to create fusions? Why else would we
form clubs, communities, and organizations? Such attachments protect
against loneliness, against being separated from the flow of life. At the extreme,
however, fusion is responsible for much unhappiness. Children who
have grown up in brutal homes may be unwilling to leave them, not because
they have nowhere else to go, but because they have established a fusion
with their powerful parents and are afraid to destroy it. Similarly, spouses
whose marriages have long ceased providing them satisfaction often find it
difficult to separate lest in their old age, they find themselves alone.


One example of an individual's need for fusion in order to ward off his fears of death is as follows:
A well-trained, enormously presentable business executive had held seven positions
in as many years, and he was now finding it difficultto gain employment.
Each of his employers had been impressed both by his credentials and his industriousness.
He was moved gradually into positions of greater responsibility. Oddly,
however,just as he had begun to inspire faith in others, he would "foul up." His
errors were as costly as they were inexcusable,and they led quickly to termination
from the job. In the course of treatment with an existential therapist, it was found
that success had a powerfully unconscious meaning for him. He feared success,
for it meant isolation, standing apart from others. For him, success was analogous
to death, in that it destroyed fusion. He unconsciously felt that it was better to be
indistinguishable from the mass of people than to stand alone, even successfully.

Existentialists believe that we are
responsible for the way we
perceive the world and for the
way we react to those
perceptions. This includes taking
responsibility for those who are
close to us when they are too
young or old to be able to help
themselves.

Authenticity and Inauthenticity
The desire for either specialness or fusion can lead to inauthentic, or false,
modes of behavior. These ways of acting are false in that they are designed to
achieve unattainable goals. Consider someone who tries to avoid the fear of
nonbeing by fusing with others. He may say things to others that he hopes
will please them, but that he does not really mean. For example, he may
conform his opinions to theirs, bend his behaviors to suit them, do the
things they do, even though his mind and body would rather believe and do
something else. Gradually, he comes to lose sight of what it is he wants to do,
while finding his conformity to others' opinions and behaviors only a pale
pleasure. He has paid for a tenuous security against the fear of death by sacrificing
his own authenticity.
The fear of death, then, promotes a host of irrational behaviors, according
to existential thinkers. But that is not the only source of human irrationality.
Whether one believes that one is fully responsible for one's life plays an
equal role in determining human happiness or misery.

RESPONSIBILITY
The assumption of personal responsibility is central to existential thinking,
for responsibility means authorship. It says that we are responsible for the
way we perceive the world and for the way we react to those perceptions. To
be responsible "is to be aware that one has created one's own self, destiny, life,
predicament, feelings and, if such be the case, one's own suffering"
(Yalom, 1980).
The degree to which we are responsible for our own feelings and behaviors,
if at all, has been a matter ofconsiderable theoretical dispute. Personal
responsibility for experience and behavior plays only a minor role in psychodynamic
theory. Psychoanalysts tend to hold the past more responsible
for the present.
Radical behaviorists similarly minimize the role of personal responsibility.
Although they are less inclined to view the past as the molder ofcurrent
behavior and attitudes, they hold the present environment (rather than the
individual) responsible. "A person does not act upon the world," B. F.
Skinner writes, "the world acts upon him" (Skinner, 1971, p. 271).

Existential psychologists take strong exception to both the orthodox psychoanalytic
views and the behavioral ones. They find a strong role for responsibility
in both normal and abnormal personality.
More at:
http://emotional-intelligence-training.weebly.com/

Of course you know the training method I recommend!
http://theliberatormethod.com/Welcome.html